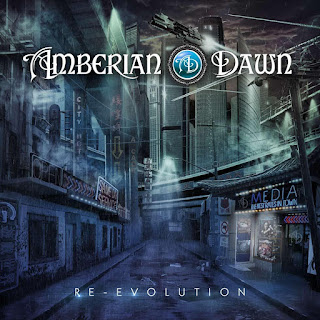 Amberian Dawn is one of those bands where I'll listen to their music every now and then but, I can't say I love them. However, this all changed when they released "Circus Black" last year. I even bought "End of Eden" and "Re-Evolution". I've found it difficult to find physical copies of their older albums here in the UK without running into an imported version or buying from their webshop which, it looks like I'll be doing soon!
Albums which I've bought recently from other bands, have either been a hit or miss when it comes to the overall quality of the album. With "Re-Evolution", it's more than a hit, it's a gem.  I hear all the time from bands that "our new album is heavier than our previous album" so you end up getting the album and it's no different from their last. I'm not that well educated in music when it comes to describing how a band has changed their sound but, if you've listened to Amberian Dawn's older albums with Heidi on vocals, you'll notice straight away that "Re-Evolution" is heavier. For this album,  the band has re-recorded all eleven songs and has added new arrangements here and there so it's all fresh and new.
I'd also like to make a comment about the artwork. It's the most beautiful artwork I've seen for a metal album! I consider this album a staple in my CD collection as it's an all round well-done album.
It's definitely an album worth checking out if you're new to symphonic metal or are looking for a new band to listen to though, I would recommend listening to "Re-Evolution" first before diving into their older albums. 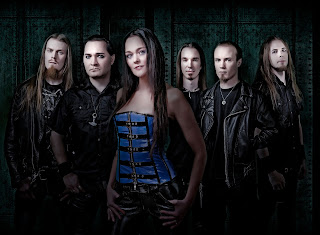